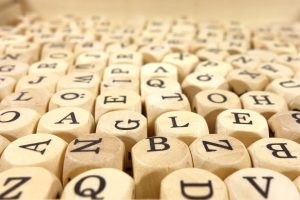 Last year, search giant Google announced it was reorganizing and creating a holding company with the name “Alphabet”. Google co-founder and chief executive Larry Page wrote, “We liked the name Alphabet because it means a collection of letters that represent language, one of humanity’s most important innovations, and is the core of how we index with Google search”. Although a nice sentiment, Google’s name change could create legal headaches for the search titan, with hundreds of companies already using the innocuous-sounding ‘Alphabet.’

If you think about trademarks on a spectrum of strongest to weakest, there are five main types. At the strong end are coined or fanciful names; marks which, on their own, do not mean anything. The “Google” mark is actually an example of such a mark. Be honest, prior to hearing the term “Google”, did you ever use the word? I know I didn’t (I only heard the word first used by our law librarian at the big law firm I used to work at—in 2000!). Towards the weaker end of the trademark spectrum we have suggestive marks—these are words, phrases, numbers or graphics which create a not-so-obvious association with your brand. Finally, the two weakest forms of trademark are descriptive and generic names, for example “body shop” or “tacos”. Basically, these are where the mark describes your actual good or service or is by definition the very product itself. Even being generous, Google’s “Alphabet” mark falls into the suggestive camp, potentially describing the ever widening range of products and services that Google offers. Thus, in addition to being a rather (in this Phoenix trademark attorney’s humble opinion) blah sounding mark, the name Alphabet does not do a ton for Google, legally speaking. In fact, it may actually be counterproductive.

Hundreds of businesses in the U.S. already use the word “alphabet” or one of its many variants, as a trademark (the United States Patent and Trademark Office currently lists more than 400 matches). Perhaps because of (or in spite of) this, Google has not filed for a trademark using its new handle.

On the plus side, the more widespread the use of a particular word is in other marks, the easier it would be for Google to argue, and the more likely the USPTO would be to conclude, that the Alphabet mark can co-exist with the other, competing marks and should be allowed to be registered. For example, here in Arizona, think how many companies use the word “Desert” or some variation in their company or product name.

Still, it is very possible a company in a similar industry with a similar name could have a prior claim to the trademark, using a pre-existing claim to the name to pursue or threaten litigation in an attempt to shakedown the search giant. However, a company with a $650 billion market cap may not be so easily cowed and, if push comes to shove, Google could simply outlast any challenger in court or decide to buy out any litigant left standing.

It is hard believe that Google doesn’t know what it is doing. Or maybe it just doesn’t care. In the end this could just be a simple case of “Why? Because they can.” Google knows that it can meet and almost certainly exceed the litigation budget of just about anyone who would try and challenge it (however strong their legal claim to the trademark’s use in their business might be).

However, for the ordinary business without tens of billions in free cash on its balance sheet to pay for trademark litigation, this isn’t always the most fiscally sound or practical strategy. If you have or are thinking about starting a business, you should spend the time, effort and, if necessary, money to select or develop marks that are arbitrary or coined, avoiding suggestive, generic, or descriptive marks as much as possible. Furthermore, if you plan on selling your goods or services across state lines, seek federal registration of your mark with the USPTO as soon as possible. Even if you have not actually used your mark in-commerce yet, you may still file for Federal registration based upon a legitimate intention to use the mark at a later date.

Schedule a Meeting | Request a Quote

We offer an initial (virtual) office meeting with an attorney at a reduced hourly rate through Zoom, WebEx, or Google Meet (live, in-office appointments are unavailable at this time).  To request your virtual meeting, please review our Initial Consultation Policy, fill out and submit the form below: