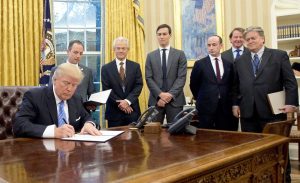 By now, most of my well-informed readers have heard of the war-of-mudslinging between President Trump and his former campaign mastermind/chief strategist Steve Bannon.  As a Phoenix business attorney, one aspect of our President’s latest feud that was of real interest was the cease and desist letter sent by Trump lawyer Charles Harder to Bannon accusing the former White House staffer of being in violation of a non disparagement agreement he entered into when he joined the Trump presidential campaign.

In my practice, I have noticed the increasing use (and request from clients to integrate) such clauses in both business and employment agreements over the past several years.  The question is, are such clauses actually enforceable?

The short answer is: yes.  The handful of state and Federal courts which have taken up the issue appear to be more or less in agreement that such provisions are enforceable.  The reasoning is usually something along the lines of this:  the employer and employee are bargaining at “arm’s length”, with the employer wanting the clause in the employment contract and the employee able to extract a higher salary or other compensation in order to agree to such language.  If both sides are freely entering into their agreement with full understanding of the bargain they’ve made, then why shouldn’t the provision be enforced?

What about Non Disparagement clauses in Arizona?

Here in Arizona (where I am licensed to practice) anyway, at least one Federal court has upheld the enforceability of non-disparagement clauses in employment agreements.  In FreeLife Int’l, Inc. v. Am. Educ. Music Publications Inc., 2009 WL  3241795 (D. Ariz. 2009), a multi-level-marketing company sought to enforce a non-disparagement clause against one of its former “marketing executives”.

Although the agreement was an online “click-wrap” application form, in which the defendant consented to the employment agreement by clicking on an “I Accept” box prior to submitting his application, the Court nonetheless found the contract to be valid and enforceable between the parties.

As to the non-disparagement clause itself, defendant tried to argue that the clause should be invalidated because it exceeded the parties’ reasonable expectations and was, of its own terms, unconscionable.  The court was unpursuaded, finding the provision to be neither objectively bizarre or oppressive and concluding that clause was unambiguous and that the defendant had admittedly assented to it by clicking and submitting his application.

Non Disparagement provisions against consumers may not be enforceable

Keep in mind that FreeLife involved an employer-employee arrangement.  The courts which have found non-disparagement clauses to be enforceable have predominantly done so in this context or in those of employment-separation agreements.  Whether similar clauses hidden in the boilerplate which many businesses now make customers agree to as part of website “Terms of Use” browser-wrap agreements would be legally enforceable is another question entirely and one which we will save for a future post.

For now,  Arizona employers (or those doing business in Arizona) should not rest easy and take care to make sure that such non-disparagement clauses are carefully tailored so as to not be overbroad or by their own terms susceptible to arguments of being unconscionable.

Employers should also make sure that such clauses are drafted in plain language, that the (prospective or soon to be ex) employee’s attention is drawn to such provisions, and that her execution of such agreement is done freely and with understanding of its impact.

While Donald Trump has an (at-best) dubious record of both threatening, commencing, and defending civil lawsuits, in this case (at least according to the weight of court decisions on the matter so far) the President and his lawyers may very well have a case that, by speaking to author Michael Wolff negatively about members of the Trump family, namely daughter Ivanka, son in law Jared, and Donald Trump, Jr., Bannon breached the non-disparagement provision of his employment agreement with the campaign and that such clause should be enforced against him.

Ben Bhandhusavee is the Managing Attorney for BhandLaw, PLLC, a Phoenix business and technology law firm working with start-up companies, creative intellectual property matters, and complex corporate M&A and technology transactions.  Ben can be reached at (602) 678-2970 or by e-mail at bbhand@bhandlaw.com

Schedule a Meeting | Request a Quote

We offer an initial (virtual) office meeting with an attorney at a reduced hourly rate through Zoom, WebEx, or Google Meet (live, in-office appointments are unavailable at this time).  To request your virtual meeting, please review our Initial Consultation Policy, fill out and submit the form below: